Click the book cover to find my books online at Amazon. 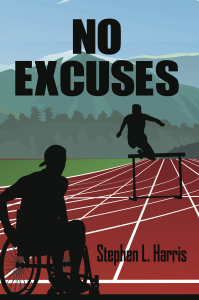 “Which teenager doesn’t dream of becoming a sports star? My idol was the 1960 Olympic decathlon champion Rafer Johnson. He awakened my ambition to train for all disciplines. Oh dear! Shot and discus were heavy, hurdles high, the sandpit in the pole vaulting quite deep, the 1500m race excruciating. Ultimately, I did not have enough talent to become a ‘king of athletes.’ Nevertheless, these were important lessons in developing will and perseverance, and in making friends—according to the recommendation of the prince of poets, Johann Wolfgang von Goethe: ‘One look into a book and two at life!’ In No Excuses, Stephen Harris captures that will and perseverance needed to be the very best. A wonderful book.” —Volker Kluge, editor of the Journal of Olympic History

Duffy’s War: Fr. Francis Duffy, Wild Bill Donovan, and the Irish Fighting 69th in World War I Named one of the best books on America’s participation in the Great War by the World War One Historical Association, Duffy’s War captures the story of brave New Yorkers through letters and diaries, some never seen before.

Rock of the Marne: The American Soldiers Who Turned the Tide Against the Kaiser in World War I

The heroic stand of these soldiers earned for the Third Division its famous nom de guerre “Rock of the Marne.”

Interviewing many of the Golden Olympians, including his idol Bob Mathias—the 1948 and 1952 decathlon champion—and members of the 1980 “Miracle on Ice” hockey team as well as Eric Heiden and Peggy Fleming, was a thrill and wonderful experience.